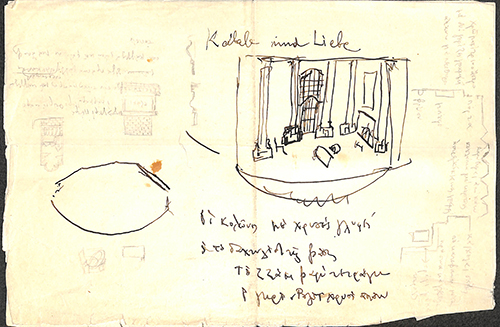 The notebooks collection includes handwritten and typed scripts, notebooks (with inset published pages) and books with inset annotation pages and annotated scripts.
These are mostly director’s notebooks and prompt books as well as translations. Moreover, there are several handwritten and typed pages of notes, pertaining mainly to play translations and stagings. They contain personal directorial and dramaturgical notes, intonation, linguistic and translational notes but also extracts of theoretical texts which were integrated in the director’s personal research.
Connection to performances was established according to performance history and the cast and chronological information found in the archive. The greatest part of the collection has been digitized and documented.

The collection of documents and personal items includes personal and professional documents which are relevant to management and finance, analytical tables of the theatre companies, awards and various post cards and invitations. Exhibits related to the director’s studies and his activity as a theatre teacher are also included in this collection.
Particularly interesting and notably challenging in terms of classification are the abundant and diverse notes, either rough drafts or neatly written ones, where personal matters co-exist with professional and practical issues of everyday life or with comments and personal judgement; where, for instance, Lessing’s Hamburg Dramaturgy was found next to food recipes and trendy song lyrics.
Various drafts of speeches, lectures and articles, not only in Greek but also in French, Spanish and English, also belong in the same collection. They depict Dimitris Rondiri’s theoretical background, his method and his way of thinking, mainly in relation to ancient Greek drama and the Chorus.
The greatest part of the collection has been digitized and is being processed.

Dimitris Rondiris’ correspondence contains personal and professional letters, telegrams and post cards.
It offers evidence on the artist’s personal views as well as his meticulousness in handling procedural matters of show organisation towards the achievement of the desired artistic result. Professional relationships of a long lasting and fruitful career are also reflected in his correspondence together with personal relationships, out of the public eye.
The collection has been digitized and documented in its entirety.

The press cuttings collection consists mainly of pieces about the director’s performances. They mostly refer to the Peiraikon Theatron activity both in Greece and abroad, and they have been digitalized in their entirety. Press cuttings about the performances of other artists, theatrical news, politics and social news and articles have also been located into the archive.
The ones considered to be shedding light on the director’s artistic work are digitalized in the first stage.

In the theatre programmes collection there are mainly programmes from the tours abroad as well as informative material related to the theatres and the cities visited by the Peiraikon Theatron. In addition, theatre programmes of other performances and other theatre companies are included such as the ones within the framework of the 1968 Olympics in Mexico.
Since the theatre programmes collection is not exhaustive, it was considered appropriate that it be supplemented with digital copies of the column ''This Year’s Ordino'' of ''Theatro'' magazine (found in the books collection of the archive), where performances, contributors and actors are recorded in detail for the 1957-1968 period. Finally, in some cases, data on shows was supplemented with information from the National Theatre of Greece and E.L.I.A. archives.

The set and costume design collection is the smallest of the archive, with a few items related to the visual aspects of the performances. It also contains photographs of theatrical spaces as well as stage set photographs of several performances.
The collection has been digitized and documented in its entirety.

The collection of photographs includes personal and professional photographs of Dimitris Rondiri’s, where diverse aspects of his life and personality can be seen.
Furthermore, relationships and acquaintances emerge from the material, while there are several photographs of the theatre troupes which offer a glimpse into the tours and the atmosphere of the period.

The collection of show and rehearsal photographs from the National Theatre of Greece, the Elliniki Skini and the Peiraikon Theatron provides important evidence on the creator’s artistic work.
The collection has been digitized and documented in its entirety.