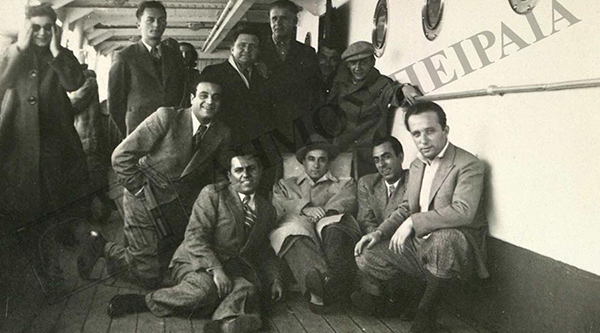 The digital archive represents almost all the physical archive in digital format, organized and documented according to the ISAD(G) standard and recorded according to the Dublin Core format. The utmost care was taken during the digitization of the materials with the use of overhead scanners and according to the established good practices for the production of digital copies in different formats (Tiff, jpeg, PDF).

Documentation was supplemented by information from the relevant bibliographical resources, including the detailed publication following older research into the archive which provided a valuable guide and rescued data that failed to follow the rest of the collection to the Municipality of Piraeus. Additionally, the National Theater of Greece and E.L.I.A. Archives have provided invaluable assistance with the organization, richness and accuracy of the information they offer.

The artistic – professional aspect of Dimitris Rondiris personality prevails in his archive as one could assume was happening in his life too. This is the reason why during classification and documentation a decision was made to bring out the exhibits of his artistic career, which comprise the greatest part of the collection.

The director’s artistic mark itself, his faithfulness to the dramatic texts, his systematic work on specific areas of Greek and international repertoire, dominated by the ideals of classic and poetic theatre, and finally the impressive number of repeat performances of specific ancient Greek tragedy stagings, led to base the organisation of the archive on the theatrical play.

What is more, a detailed performance history list is being compiled, for the visitors who would like to follow Dimitris Rondiris’ creative journey in both the art of theatre and the world. An additional tool for a user who would like to study more thoroughly is a bibliography including books, articles and internet resources which is also being compiled.

Dimitris Rondiris Archive reached the Municipality of Piraeus with several classification problems. At times, this ''lack of order'' brought to light findings which trigger the researcher’s imagination and assumptions about elements of the artist’s life and personality. There has been an effort to preserve these subtle links, wherever that was possible, even in the form of notes.

The discussion around Dimitris Rondiris artistic impact has already started in the past. However it has not been supplemented and concluded with a systematic scientific approach, yet, which is also true for other important people and issues of Greek theatre. We hope that Dimitris Rondiris Digital Archive will contribute to this end.