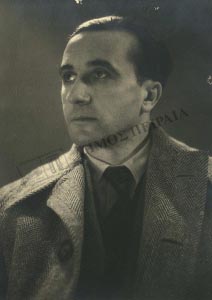 He was born in Poros island and grew up in Pireus. He was the youngest son of the judge Achilleas Rondiris and Kostoula Levantis. His brother Yiannis set up the biggest steel-processing factory in Greece and his brother Nickos was a lawyer and a president of the Athens Bar Association. His sister Maroula studied music whereas the other daughter of the family, Flora, was a philologist and contributed in the foundation of the Model Lyceum of Athens (later Moraitis School).
In 1930, Dimitris Rondiris married Vana Tsoukala and his daughter Kostoula was born in 1943. He passed away in 1981.

Studies and early years of his career

Dimitris Rondiris studied in the Hellenic Army Academy but soon quitted to enrol at the Athens Law School (in 1923 he enrolled at the School of Philosophy of Athens University) while at the same time he started working as a civil servant. He first appeared as an amateur actor in the medium length film I prika tis Annoulas (Annula's dowry) in 1917 and the next year, without his father’s knowledge, he joined the newly founded Greek Theatre Company Drama School, where he had the opportunity to study with important professionals, such as Aimilios Veakis and Fotos Politis.
His collaboration with the director Thomas Oikonomou and the Odeion Theatre, where he appeared with the pseudonym Mimis Ermannos, started in the same year. In 1923 he joined the Marika Kotopouli theatre company where he appeared in Oedipus Rex as the Second Messanger, in Hamlet as Laertes and in Antigone as Hemon. In 1927 he took part in the historic performance of Euripide’s Hecuba, in the Panathenaic Stadium (Kotopouli theatre company, directed by Fotos Politis) holding the role of the Ghost of Polydorus.
He began his directing career a year later with To dachtylidi tis manas (The mother’s ring) followed by Protomastoras (The Master Builder) in 1930, both operas by Manolis Kalomoiris, in Olympia Theatre.
Between 1930 and 1933 Dimitris Rondiris studied abroad, initially with a scholarship granted by the Academy of Athens and later as a scholar correspondent of the National Theatre. He attended courses at the History of Art Institute of the University of Vienna and at the Reinhardt Seminar. He also attended the Salzburg Festival and rehearsals in the Vienna Opera and the Burgtheater, as an apprentice director, while in Berlin he observed the work of Deutsches Theater.

During his long lasting career as a teacher, Dimitris Rondiris’ contribution determined the shaping of acting and theatre education in Greece. He started in the Drama School of the National Conservatoire, in 1926 and between 1933 and 1964 he taught at the Athens Conservatoire. He also taught at the Drama School of the National Theatre in parallel with his directorial work. In 1940 he was granted a licence for the Dimitris Rondiris’ School of Acting and Direction and in 1969 he founded the Peiraikon Theatron School of Theatre Studies.

Dimitris Rondiris joined the National Theatre of Greece, as an assistant director to Fotos Politis and a teacher in the drama school, as soon as he returned to Greece, in 1933. After Politi’s death he became first director and held this position until his resignation in 1942. During this period his name was connected with important productions, including Kostis Palama’s Trisevgeni (1935), Shakespeare’s Hamlet (1937) -which also participated in the successful 1939 tour-, King Lear (1938) with Aimilios Veakis as the lead actor and many more. With the performances of Sophocle’s Electra τin the Odeon of Herodes Atticus (1936) and in the Ancient Theatre of Epidurus (1938, the first professional use of the theatre in modern times) he applied the theoretical view regarding open theatres as the natural space for the Ancient Greek Drama.
Dimitris Rondiris returned to the National in 1946, as a general director this time, appointed by Tsaldari’s government and held this position until 1950. During this period he mounted Aeschylu’s Oresteia with Marika Kotopouli as Clytemnestra. In 1952 he took part in the National Theatre’s tour in the United States of America with Sophocle’s Electra and in 1953 he returned as a director general of the national company until 1955. In 1954 he directed Euripide’s Hippolytus at the Ancient Theatre of Epidaurus preparing the official inauguration of the Festival which was realised a year later, when Rondiris had already been removed from the national company.
Dimitris Rondiris served in the National Theatre of Greece as a director, teacher and general director. His artistic mark was particularly evident on the National’s stage from its inauguration, in 1932, until the late 1950’s: he directed more than sixty works of the Greek and foreign repertoire while his contribution determined the so called “revival” of Ancient Greek Drama and the establishment of the Epidaurus Festival.
He went back to the argolic theatre two more times, always with the National Theatre: in 1959 with the Oresteia and in 1978 with his last work, Sophocle’s Electra.

Elliniki Skini (1950-1951) was Dimitris Rondiris’ first attempt to create his own theatre company in collaboration with well-known lead actors such as Mary and Thodoros Aronis, Rita Mirat, Ares Malliagros, Nikos Hatziskos and more. The short-lived venture had an impressive beginning with Goethe’s Egmont featuring the Athens Conservatoire Orchestra, in Kyveli’s Theatre. Ostrovky’s The forest stood out among the following productions of the company.

Piraikon Theatron was founded in 1957, in collaboration with the Municipality of Piraeus, and was based on the Municipal Theatre of the city. The first performance was Shakespeare’s Twelfth Night followed by Schiller’s Intrigue and Love, Beaumarcais’ The Marriage of Figaro and Goldoni’s La locandiera translated by the director. In 1958 a production of Aeschylus’ The Persian’s was located on the west side of the hill of Castella, wherefrom the audience had an actual view of Salamina Island.
Even before the discontinuation of the use of the Municipal Theatre, Dimitris Rondiris, in collaboration with the producer Theodoros Kritas, had started orienting the Peiraikon Theatron towards the direction which would soon become its identity and the reason for its international recognition. For about ten years, until 1968, the director continued processing and presenting an accomplished approach to the staging of ancient Greek drama, the technique and the chorus, with the aim to make it known worldwide. The permanent team of collaborators consisted of the choreographer Lukia and the composer Konstantinos Kydoniatis. Apart from the main leading actress, Aspasia Papathanasiou, the company featured Antonis Xenakis, Titika Nikiforaki and Nikos Hatziskos, while later on Elsa Vergi, Krinio Pappa, Kostas Galanakis, Christos Fragos, Maria Moscholiou, Miranda Safeiropoulou would join the Peiraikon Theatron.
The tours started in 1959 with Sophocle’s Electra and Aeschylus The Persians, in Belgrade and Wisbanden. Between 1960 and 1968 the company travelled in Europe (West and East), Cyprus, Israel, North and South America, presenting exclusively ancient Greek drama. Aeschylus’ The libation bearers and Eumenides were initially added in the repertoire which was later enriched with Euripides tragedies: Hippolytus, Medea and last Iphigenia in Aulis.

During the 1960 Festival of the Theatre of Nations in Paris the leading actress Aspasia Papathanasiou received the First Actress Award for her interpretation of Electra. During the summer of 1960 the Piraikon group gave many performances in ancient theatres all over Greece and inaugurated the Ancient Theatre of Dodoni. In 1961 as a guest of I.A.S.T.A. (Institute of Advanced Studies in Theatre Arts) Dimitris Rondiris directed Electra with an american cast, while in September 1962 the group presented Electra for the English Television in London. In the same year Dimitris Rondiris received the Gold Medal of the City of Athens and in 1963 the 5 years of Peiraikon Theatron and the fourty five years of Dimitris Rondiris artistic offer were celebrated in Delfi, where Rondiris was bestowed honorary citizenship. The 1965 performance of Hippolytus in Epidaurus was dedicated to Dimitris Mitropoulos. Peiraikon Theatron took part in Edinburgh International Festival in 1966 and in the International Arts Festival of the XIX Olympiad in Mexico, in 1968.