Dimitris Rondiris Archive at the Municipality of Piraeus 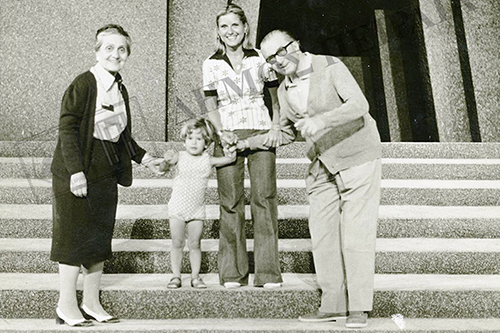 Dimitris Rondiris archival collection was donated to the Municipality of Piraeus by the director’s daughter and sole heir Ms Kostoula Rondiris, in July 2016. Ms Rondiri’s donation is accompanied by her wish to disseminate her father’s work to the next generations, so that it can be studied and also used in modern theatre education.

The Municipal Theater of Piraeus, this artistic centre of our city, was honoured to have at its helm for two years the man who connected his name with the revival of the ancient drama and its spread throughout the world like no other. About 60 years ago, the Municipal Council of Piraeus took the decision, following a proposal by the Theater Committee and the poet Nikiforos Vrettakos, to entrust its fate to the distinguished Piraeus director Dimitris Rondiris.

The new form was named Piraeus Theater, not only to state its origin or its base, but mainly to express its deep connection with the dreams of this city, its expectations, its artistic vision for an aesthetic, artistic, theatrical rebirth, for a more creative, more dynamic, more humane tomorrow, seen through the prism of the greatness of Rondiris's spirit.

Piraeus Theater travelled around the world by means of the ancient tragedy and the name of the city of Piraeus. The innumerable performances, the awards, the honorary distinctions and above all the representation of our city, our country, the spread of the Greek spirit to the ends of the world, is the invaluable contribution of Dimitris Rondiris to our city, to our homeland.

As a sign of gratitude and also recognition of the work of the great director, the Municipality of Piraeus renamed the central stage of the Municipal Theater to “Dimitris Rondiris Stage” on October 2, 2017.

The Mayor of Piraeus,
Giannis Moralis

I am deeply moved that the digitization and public promotion on the Internet of the archive of my father, director Dimitris Rondiris, is finally realized.

This constitutes his legacy for the next generations of theatergoers, as it includes evidence related to his theatrical activity from the beginning of his career. The great moments of his triumphs in Greece and abroad are reflected in his photographic material, notes and letters, while the glowing reviews of the Press and the honorary distinctions from all over the world complete the picture of his majestic artistic course.

Piraeus honors Dimitris Rondiris who honored the city and glorified its name across the world.